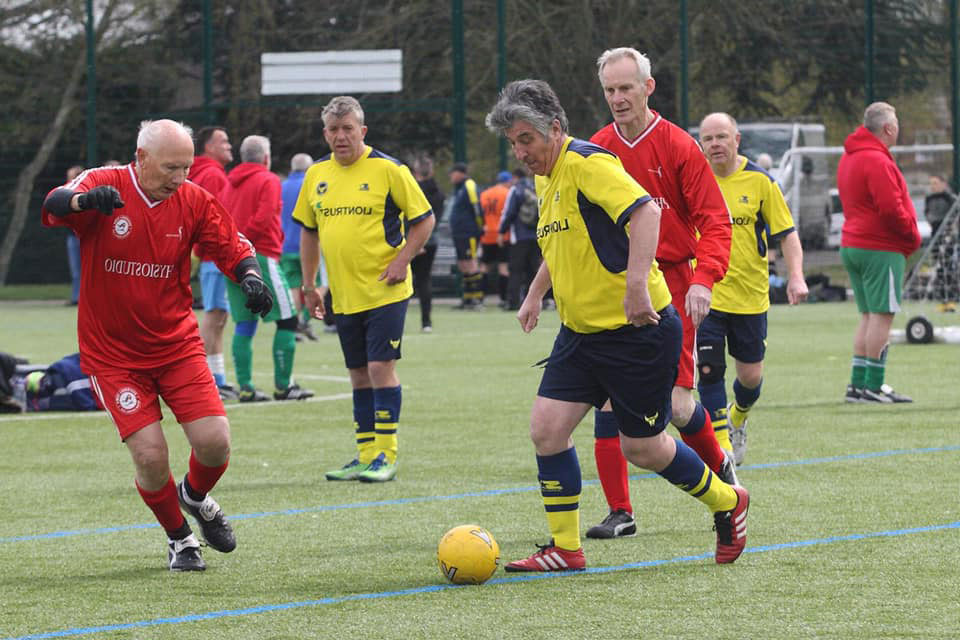 Oxford United Walking Football Club was formed on May 31st 2017 by club secretary Ken Wroe with the support of Oxford United in the Community.

Soon after, the club had entered two teams into the Thames Valley Walking Football League at Bisham Abbey.

In the spring of 2018, the club entered a team in its first overseas tournament by competing in the Albuferia Walking Football Cup which is held over two days in Portugal.

During the summer of 2018 the club entered various events and won the Vale of White Horse / South Oxfordshire over 60’s tournament, and were also runners up in the Abingdon over 60’s. Two teams were entered in the Summertown Stars Festival to finish a very credible first and third. The club also competed and did well in the Witney Festival in what turned out to be very hot conditions

In the Autumn of 2018, the TVWFL was restructured to allow more teams to enter and our A team was placed in the newly named Bisham Premiership, whilst the B team were in the new Bisham League 2.

On the 13th September 2018 the club held its first AGM which was attended by twenty-two members and the first committee and officers were thereby elected.

In October the club entered three teams into the first Oxfordshire Walking Football Festival and two of the OUWF teams eventually played each other in the final.

At the end of the year the club entered two teams into the inaugural Christmas Cup tournament hosted by Highworth Town WFC and played at the impressive Swindome. Both teams finished on six points but failed to make the semi-finals.

In 2019 the club once again entered two teams to play in the Albuferia Walking Football Cup, now known as the EuroCopa Tournament. The A team narrowly missed out on the semi-finals, having won all six of their group games on day one, and three on day two. One draw and one defeat were the results that cost them. Top scorer was Nigel Wilkins with 11 goals.

The B team, with no recognised goalkeeper and six of their eight man squad being over sixty, in an over 50’s competition, found it tougher with one win and one draw from their nine games over the two days.

The club also entered two teams into the first Oxfordshire FA walking football tournament with the A team reaching the semi-finals.

The TVWFL spring league ended with the A team, competing in the Premier Division finishing fourth, whilst the B team  in League 1 finished third.

The newly formed C team ended up as champions of League 2 without conceding a goal in their twenty games.

During the summer, the club entered three teams into the Summertown Stars Festival at Cutteslowe Park. The competition was eventually won by OUWFC Yellows who beat Haddenham 1-0 in the final.

Two teams were entered by the club into the Bicester fossils tournament with the B team eventually reaching the quarter-finals. This tournament managed to raise £1300 for charity.

During the early part of 2019 the club formed a ladies over 18’s team and they were one of the three teams the club entered in a charity tournament played in Salisbury in aid of Stephen Darby’s Motor Neurone Disease charity.

The ladies played five games winning one, drawing three and losing just the one in a group that included Arsenal, Fleet, Canterbury, Crawley and Walton ladies.

At the end of August, Oxford United FC allowed the club to hold a bucket collection and a display of ladies walking football at the Kassam Stadium pitch at half time during a home game against Coventry City. The bucket collection raised £1120.93 for the purchase of a new club defibrillator.

The ladies played two more tournaments during the year, at Portsmouth and Walton.

The TVWFL Autumn League saw the three men’s teams back in action with the A team again in the Premier League where they finished third on 30 points, level with second placed Watford who had a better goal difference.

As the C team won League 2 in the spring season, they were promoted to League 1 where they came up against the B team. The B team eventually finished third on 26 points, with the C team fourth on 23

The last football of 2019 came with the second annual Christmas Cup hosted by Highworth at the Swindome. OUWFC entered two teams with the A team reaching the quarter-final.

In January of 2020 the club entered three teams into a local charity tournament. Two over 50’s and one over 60’s. The over 50’s A team reached the semi-finals with the Over 50’s B, and over 60’s failing to get out of their groups.

At the clubs 2019 annual awards night, held on 1st February 2020, the C team finally received their TVWFL League 2 champions trophy and additional awards were also presented for outstanding players of the year and other achievements.

The club is not just about competitive play and welcomes all abilities throughout the year with our twice weekly sessions for over 50’s men and over 18’s ladies.

Any cookies that may not be particularly necessary for the website to function and is used specifically to collect user personal data via analytics, ads, other embedded contents are termed as non-necessary cookies. It is mandatory to procure user consent prior to running these cookies on your website.